Written for and published by Prescott Motorsport.

In a race led for a large part by Brit and Audi-driver Jamie Green, it were the Brits in the Mercs who took the honours, as the rain never came. In qualifying it was Paffett before Di Resta, after the race it was the other way around.

Championship leader and one of the local heroes Gary Paffett managed to score Pole Position for the second race at Brands Hatch, followed by second in the standings and fellow Brit Paul Di Resta. Third was ex-F1 driver Pascal Wehrlein in the third Mercedes in a row, while reigning champ René Rast was the best qualified Audi-pilot in 4th. Best placed BMW-driver was Augusto Farfus, putting his Shell-liveried M4 7th on the grid. Saturday’s winner Dani Juncadella didn’t reach further than 14th.

In contrast to Saturday, which saw blue skies with a couple of clouds, there was now a threat of rain. The race started in still dry conditions, after a shower had hit the track earlier in the day. When the red lights turned off, for the first couple of corners, Paddock Hill Bend and Druids, it was like the leaders were lining up for a rolling start. Di Resta got better of the line putting his c63 on the outside of Paffett and stayed there until after Druids. That’s where he got the better exit and could finally secure the lead.

Right behind and one corner later, Auer and Frijns came together after which the latter parked his RS5 in the tire barrier. Frijns car seemed difficult to remove, so the safety car was immediately called on track. Sad story for the Audi driver who scored his best qualifying position in his rookie year with a 6th position on the grid.

But… Right before the safety car passed the crash site (inside of Graham Hill bend) for the first time, Frijns managed to get his car in reverse and rejoin. From the replay it became clear that Farfus actually pushed the Dutchman into an already spinning Lucas Auer, making it impossible to avoid. Farfus was missing quite a bit of his front bumper, but managed to maintain his pace in 5th position.

Two laps later it was time for the restart and it was Di Resta who was most awake. Paffett and Wehrlein dived side by side through the first corner after which Paffett successfully defended his 2nd position. At Druids, Rast was already on the outside of Wehrlein but ran out of asphalt at the exit of the corner, forcing him through the grass which lost him a place to Jamie Green. Green, in his orange Audi RS5, had a formidable first part of the race, climbing up from an 11th place on the grid and now in 4th. Rast was now under pressure from the BMW’s of Wittmann and Eng in 6th and 7th. A couple of laps later Green was (in my view) wrongfully penalized for Rast’s off road excursion, where it seemed that Wehrlein was the one to blame. It might also be that he got warned for forcing Eng of the track in lap 1, although that would seem a bit harsh to me. Unfortunately, Race Control didn’t specify for which incident exactly Green received a warning.

Where in Saturdays race we saw a couple of very early pitstops and the whole field pitted in the first 20 minutes, it was now all about going on as long as possible to be able to switch to rain tires at the exact right moment. It the rain came ofcourse… 15 minutes into the race, it became clear that the expected rain might blow over and we started seeing the first stops. Wehrlein (Mercedes) from 3rd and Wittmann (BMW) from 6th were the first to pit at the end of lap 5, followed by Duval, Mueller (both Audi) and Spengler (BMW).

In front, leaders Di Resta and Paffett had a 3 second gap to Jamie Green. Rast behind then pitted and managed to come out right in front of Wehrlein virtually 4th. Just like yesterday, it seemed that the cold tires of the car that just came out of the pits proved to be a disadvantage the latter could profit from. Not this time however, as Rast succeeded in keeping Werhlein’s Mercedes behind him, defending fiercely against the young ex-f1 driver.

Things got really interesting when Paffett pitted at the end of lap 8. He managed to get out of the pits well in front of Rast. Di Resta pitted one lap after and came out a second or two in front of Paffett. Paffett, on his warmer tires, managed to close the gap to a just under a second by the time Di Resta’s tires were also up to temperature. 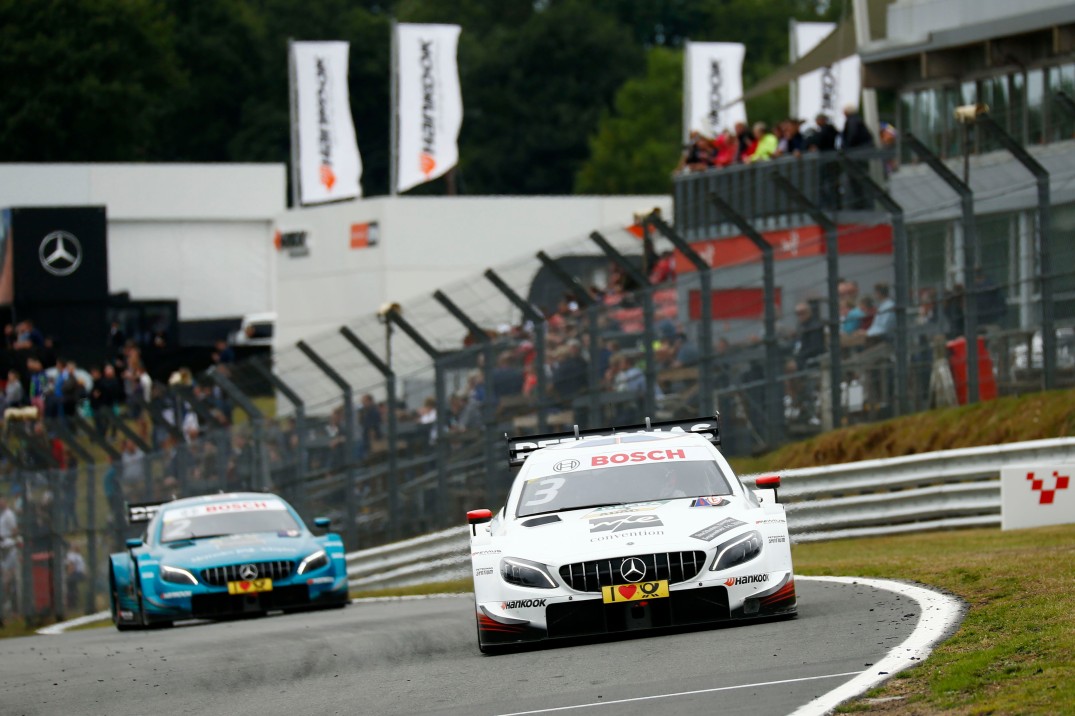 Jamie Green was now the only car from the original top 10 who hadn’t pitted yet, with 30.5 seconds gap to Di Resta. In between were also Rockenfeller, Mortara, Auer, Ericsson and Frijns who all still had to make their mandatory stop. Could they wait it out until the rain came?

Green and Rockenfeller, losing almost a second a lap to Di Resta, Paffett and Rast, knew their only chance was waiting for the rain to come. The two Mercs having a 2 second lead over Rasts’ Audi. Paffett held the gap at around 8 to 9 tenths of a second, seemingly trying to save a bit of tires to be able to place another attack further into the race.

Halfway through the race, it was Rockenfeller who pitted first, rejoining in 11th right in front of Loïc Duval, the latter able to make a pass on his warmer tires, referring ‘Rocky’ back to 12th.

30 laps and well over 45 minutes into the race and Jamie Green still hadn’t pitted. He now managed to have build a gap big enough to being able to rejoin in 4th, projected to exit the pits right behind Rast. If the rain would come, there would now be no one able to steal the victory from the Brit, who’s having such a difficult season up to now with only three points finishes with 6th as his best result.

11 minutes before the end, at the end of lap 31, Green finally came in for a fresh set of tires. As predicted, he managed to come out in 4th, but Wehrlein in 5th managed to pass the orange Audi immediately on his warm tires. Wittmann was right behind and Green, after a short struggle had to let the BMW pass by as well.

This however wasn’t the end of Green’s misery: while trying to defend his position against Wittmann he forced the German well off the track. This was already his second warning after the incident in the opening stages of the race with René Rast or Philip Eng and he now received a drive-through penalty. Nevertheless, if Green was warned for pushing Rast off the track, this might have been an erroneous call by the stewards as it was clearly Wehrlein who forced the red Audi into the grass, not Green. Being unable to protest, Green had no other choice than to consume his drive through a lap later, after which he rejoined 16th and his race was ruined.

In the meantime, at the head of the field, not only had Paffett caught up to the rear wing of Di Resta, he now also had René Rast on his rear bumper. Paffett decided to focus on coming in 2nd and defend against Rast, giving Di Resta the win on home turf in the process. No positional changes occurred in the last lap as a result: Di Resta scored his second win of the current season, his tenth in total. Wehrlein managed to score a 4th position, in front of best placed BMW-driver Marco Wittmann. 6th was Rockenfeller, followed by Eng, Auer, Juncadella and Müller to complete the top 10.

Rounding up, it was Di Resta managing to close the gap to Paffett a little after yesterday’s complete off day . Scoring 25 points for the victory (and two for his 2nd place grid position), he’s now 29 points behind Paffett who has a 177 points total. Wittmann and Auer are third and fourth, both with a 110 points. Best placed Audi driver is René Rast in 9th with 77 points.

Next race is in two weeks at the Italian track of Misano.