Written for and published by Prescott Motorsport.

In a race characterized by close racing, but not too many overtakes, long time Mercedes factory driver Dani Juncadella took his maiden victory from Pole Position. Gary Paffett missed out on a podium finish, but still managed to increase his championship lead after a bad day at the office for Paul di Resta.

After qualifying it was Juncadella’s name on top of the list for the very first time. The Spaniard, who’s been with Mercedes in DTM and other (GT-) classes since 2013 with 3rd place at Norisring this year as a best result, drove one superb lap around the track in the hills of Kent to claim his first ever Pole Position. Unfortunately for him, it was Lucas Auer, also in a Mercedes C63, who dived into Paddock Hill Bend towards Druids in first position. Juncadella had way too much wheelspin coming off the line when the red lights turned off, and also lost 2nd place to reigning DTM-champion René Rast in het Audi RS5. After Juncadella came the first of the BMW’s: Farfus, Eng and Glock with first Britain Gary Paffett closely behind in 7th. 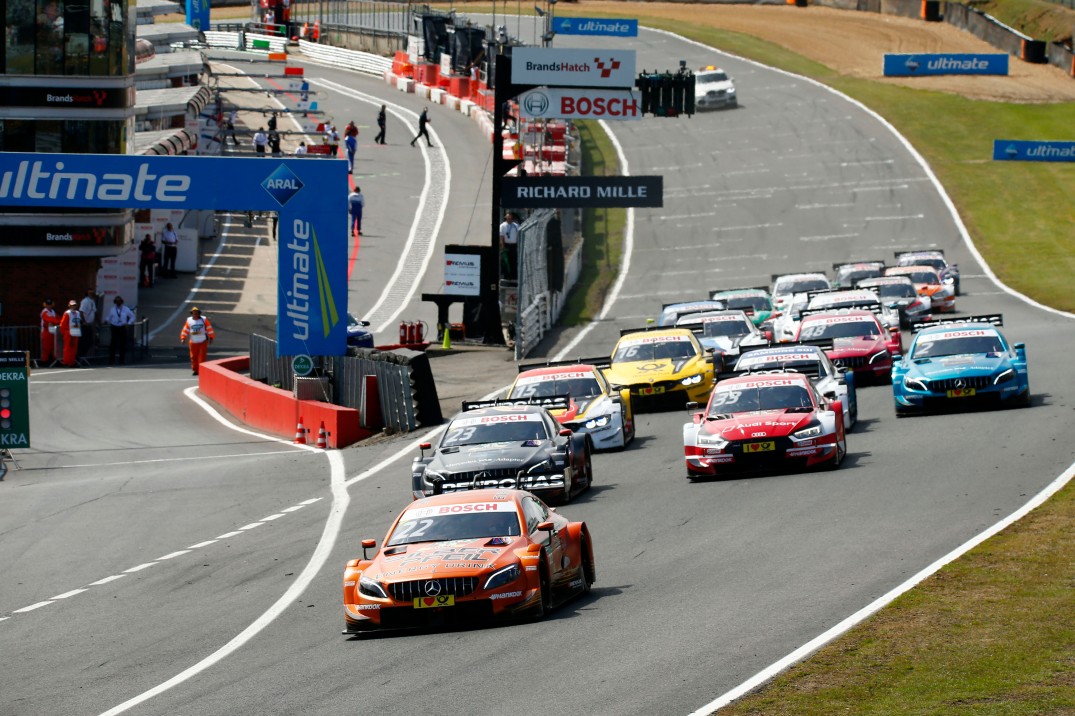 The early stoppers were helped by an early slow zone to give marshals the opportunity to recover Loïc Duval’s Audi from Druids, after he missed his braking point under pressure from Robin Frijns at Druids.

Right after the end of the (lengthy) slow zone, Farfus and Eng dived into the pits for their mandatory pitstop as well, and the BMW crews managed to get both out in front of René Rast. Rast, on warmer tires, didn’t waste any time and immediately made a successful move on Eng. One lap later, the HWA-team didn’t an even better job, getting championship leader Paffett out in front of both Farfus and Eng. The Mercedes however seemed to suffer more on cold tires, as Farfus, Rast and Eng all managed to pass Paffett on his cold tires.

Juncadella, who was still on the tail of Lucas Auer, pitted and managed to stay virtually second. A lap later, Auer also pitted and came out well in front of Juncadella, but the difference in tire temperature again proved to be decisive. Within a couple of turns, Juncadella (and Farfus, who followed in his footsteps) was on Auer’s rear wing again and with a better acceleration out of Graham Hill bend passed the orange Mercedes.

Mortara and Wehrlein, both Mercedes, were the last cars to stop. Behind, it was Juncadella virtually in the lead, followed by Farfus, Auer, Rast, Eng, and Paffett still the first Brit in 7th. Wittmann, Jamie Green in his orange Audi and Timo Glock completed the top 10.

After mowing the lawn outside of Paddock Hill Bend, Mortara was the first of the two leaders to get fresh tires in lap 13. He rejoined in 8th and was thereby back on his grid position. Right before the halfway mark Wehrlein was also in, coming out right before Mortara in 7th. After an exciting start and interesting pit stop phase, the field now settled in.

As DTM is also often called the “Formula 1 with a hood” or “Formula 1 among touringcars”, the series appeared to suffer the same issue as his single seater equivalent: on narrow tracks with lots of fast corners, it’s very difficult to overtake. Despite a drag reduction system (DRS) being available on the car, which drivers can use 12 times during a race, it is very hard to drive behind another car for a long time. Especially by lack of a ‘long’ straight like in Brands Hatch.

An interesting fight developed for place 8 to 13 where Mortara (Mercedes), Wittmann, Glock (both BMW), Frijns, Green and Rockenfeller (all Audi) came closer and closer after numerous outings (mostly at Paddock Hill Bend). After a couple of preliminary shelling’s, it was Robin Frijns who made and audacious move on Glock. Out of the last turn he put his RS5 beside the bright yellow BMW, going side by side through Paddock Hill and finally coming out in front after Druids, showing that it is definitely possible to overtake when the time is right. Ex F1-driver Glock now immediately had to fight off Frijns’ teammate Jamie Green on his left at the straight from Pilgrims Drop to Hawthorn Hill, which gave Rockenfeller the opportunity to turn up at his right side at the same time. Heading towards Hawthorn three thick, it became a game of ‘who’s got the biggest…’ in which Glock had to fold, Green called, but Rockenfeller had the Royal Flush by claiming the inside line. 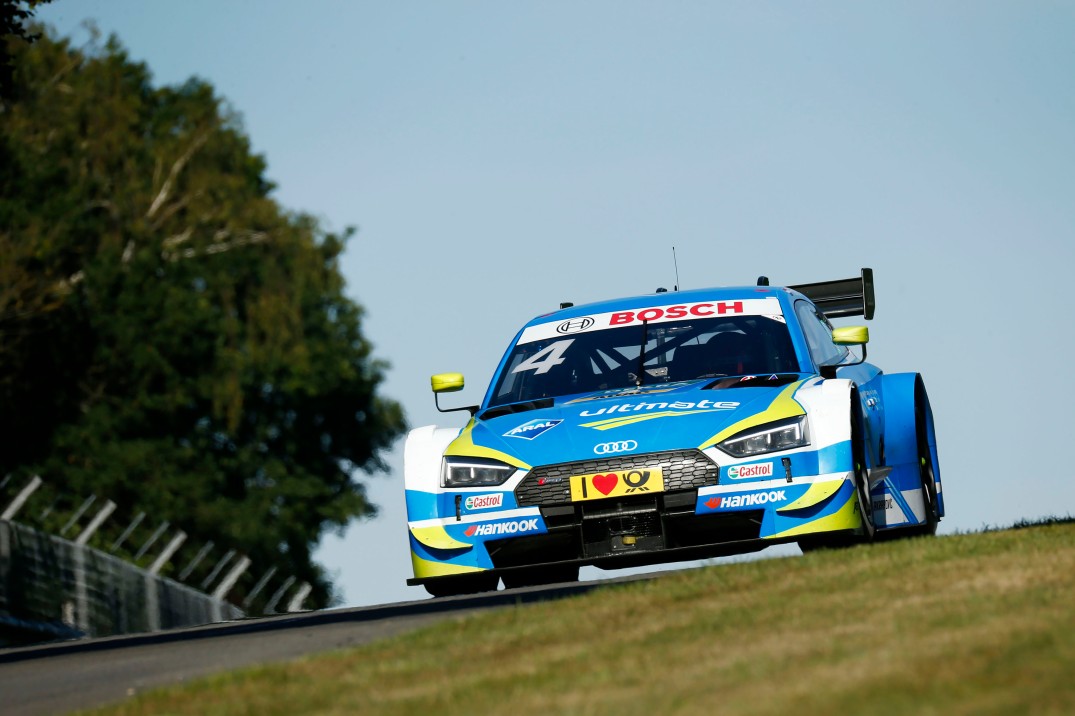 After 55 minutes and one lap, it was Juncadella who claimed his maiden victory, followed by Farfus, Auer and René Rast. In the last minutes of the race, Paffett caught up with Eng for a short but oh so intense fight for 5th, but Eng managed to fend off all attempts left and right by Paffett. Unlike Eng, Frijns, who made a very early pitstop and was now on older tires, didn’t managed to pull the last point out of the fire. He lost 10th position to Mike Rockenfeller who pitted 5 laps later in the penultimate lap.