Written for and published by Prescott Motorsport.
It took a little while before Renauer and Jaminet got their #99 Herberth Motorsport Porsche 911 up to speed after an intense meeting with the guardrail on Friday, but when they did they were unstoppable. They managed to convert their pole in a race win. Keilwitz and Kirchhöfer, leaders in the championship before the weekend, again couldn’t match the speed of the top of the field in their Corvette C7.R, adding to an already disastrous weekend in which they scored zero points

Jaminet took Pole right before Maxi Buhk in the first of two “yellow Mamba’s” Mercedes AMG, while Klaus Bachler in another 911 was really close behind. The top-3 was within 0.013 (!!!) seconds, the top-7 within 0.117s, just to emphasize how close it gets in this 35 full-blown GT3 cars series. Brit Jamie Green qualified in 6th, while fresh championship leaders Götz and Pommer started from 7th position. Former championship leaders Kirchhöfer and Keilwitz in the Corvette yesterday’s winners Perez-Companc and Mapelli in their Húracan had to come from the back of the field, starting from 19th and 22nd position respectively. 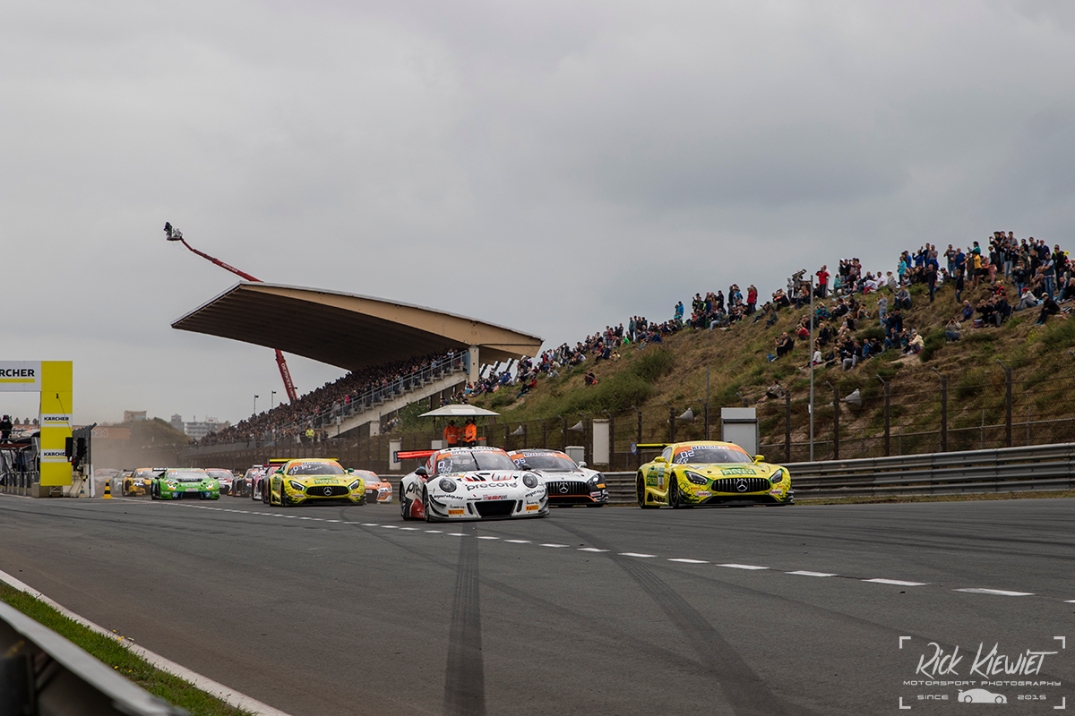 When the race started, a lap later than planned as the cars didn’t line up to the liking of race control on the first try, Klaus Bachler in the #18 Porsche 911 of Team 75 Bernhard was most awake, immediately getting up on the inside of Maxi Buhk to take 2nd place. Some pushing and pulling a bit further down the field led to the first retirement: Rolf Ineichen suffered a puncture that forced him to park the car in the garage a little later. So, it was Jaminet in the lead in the #99 Porsche 911, followed by Bachler, Maxi Buhk in 3rd and Maximilian Götz in the second yellow and green Mann Filter AMG in 4th. In 5th was Raffaele Marciello in yet another AMG and then no less than eight Audi R8s were behind: the charge from Ingolstadt was led by Frank Stippler in the #33. Daniel Keilwitz in his C7.R won 3 places in the first lap and was up to 16th.

Numerous fights broke out throughout the field, but it didn’t matter to Mathieu Jaminet in the lead. Comfortably stretching his legs around the track through the dunes, he managed to build a considerable gap of 3,5 seconds over Klaus Bachler in the second 911 in the first 20 minutes.

After 25 minutes the pit-window opened and Maxi Buhk was the first of the leaders to stop. Local hero Indy Dontje (yes, he was named after the Indy 500) took over the wheel. Jamie Green also brought in his R8 from 8th position. HTP motorsport brought out the #48 Mann Filter AMG only 0.7s over the minimum of 70 seconds. One lap later, the #47 of Maxi Götz was also in to switch seats with Markus Pommer. Pommer managed to stay out in front of his teammate Dontje, virtually now in 3rd. A fierce fight that lasted well over 2 laps followed, but Pommer managed to defend his position from his hard charging teammate. The fight might have cost the two cars though as Patrick Assenheimer, who took over the wheel of yet another AMG GT3 from Raffaele Marciello, managed to get out the pits well before his two bright yellow sister cars.

2 minutes before the pit window close race-leader Jaminet came in as well. The gap he built over the first part of the race was big enough to make a carefree pitstop and maintain the (virtual) lead with a around a 4 to 5 second gap. Last of the lead group to stop was Klaus Bachler handing the car over to Adrien de Leener, rejoining the track in 2nd position. Order after the stops was now Renauer in the #99 Herberth Porsche 911 in 1st , the #18 Team 75 Bernhard Porsche 911 with de Leener at the wheel in 2nd, followed by the #84 (Assenheimer), #47 (Pommer) and #48 (Dontje) AMG’s in 3rd, 4th and 5th with a whole bunch of R8s on their tails, led now by Ricardo Feller in the #25 BWT Mücke Audi.

After the pitstop race control brought out the safety car to remove the #19 Lamborghini Húracan of yesterday’s winners Perez-Companc and Mapelli. They had to retire the car on track with a broken left rear suspension. Renauer was hurt most by the safety car, as his lead was now gone and the field was back together again.

From the restart however he, seemingly without a care in the world, immediately continued building a steady gap: already 1.7s ahead of the field after one lap. Probably helped by the fact that de Leener in the #18 Porsche behind had to look in his mirrors quite often to keep an eye on Assenheimer, who was now practically on his rear wing. The battle was won by the maneuver of the race, made by Patrick Assenheimer in the AutoArena AMG: in the second to last corner he first forced de Leener to defend the inside while keeping the ideal line himself. This gave him the opportunity to cross behind him and take the inside line on the next corner an get to main straight in 2nd position. Renauer in the meantime already managed to built a 4,5 second gap over now Assenheimer in 2nd.

Different than yesterday, and despite a couple of cars being within a couple of tenths of second from each other, not many positions changed in the last minutes of the race. Only notable fact in the final stages of the race was Sven Barth making exactly the same mistake as yesterday: he torpedoed another car in Tarzan Corner, this time Christopher Zöchling fell victim to Barth’s overtaking trials.

Robert Renauer managed to cruise to victory quite comfortably, followed at a discreet distance by Patrick Assenheimer in the AMG GT3. De Leener took the last podium spot in his 911. Championship leaders Götz and Pommer came in in 4th, followed by teammates Dontje and Buhk. Ricardo Feller in the #25 BWT Audi was right on their tail. Kirchhöfer and Keilwitz were the first non-German car in 13th.

After the weekend in the Dunes, the championship looks considerably different: Pommer and Götz are now the new leaders with 105 points, defending an 8 point gap to Jaminet and Renauer. Keilwitz and Kirchhöfer with their disastrous weekend dropped to third, now no less than 19 points behind the leaders. Calderelli and Bortolotti in the Lamborghini Húracan do no better, also scoring a double 0, but maintain their 4th position with 62 points. They are now closely followed by Buhk, Dontje, Salaquarda and Stippler, all with 57 points.